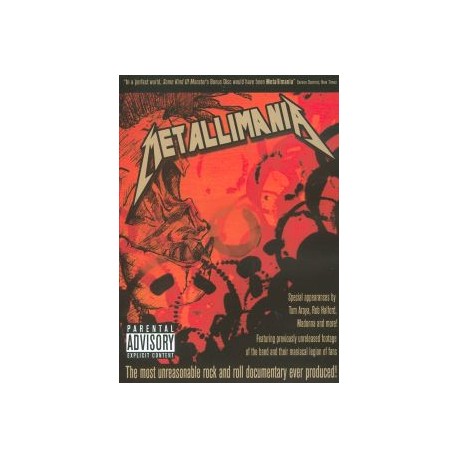 The most unreasonable rock and roll documentary ever produced!
Special appearance by Tom Araya, Rob Halford, Madonna and more!
Featuring previously unreleased footage of the band and thair maniacal legion of fans.
The wackiest, most dangerous, and drunkest rock and roll documentary ever made!
Plastic Head Vision is proud to present Metallimania. Originally produced in 1996, the film has already lived a life as one of the most hotly traded and highly coveted underground rock films of all time.
This release features over 100 minutes of ridiculous debauchery with heavy metal’s all time kings and their legion of maniacal fans. Whether you love, hate, or could give a crap about Metallica, this film will have you passed out in the bushes!
Now available on DVD for the first time, Metallimania features guest appearances by Madonna, Rob Halford of Judas Priest, Tom Araya of Slayer, members of Queens of the Stone Age, Anthrax, Faith No More and more! Fans, friends, and foes alike – no one is spared the fury of Metallimania!
* A must for any Metallica fan
* Features guest appearances by Madonna, Rob Halford (Judas Priest), Tom Araya (Slayer) and many more
* Actual interviews with the four band members from the “Black” tour
* Rare live clip with the band onstage with Rob Halford on vocals doing the Judas Priest classic “Rapid Fire”
2005 PHV / PLASTIC HEAD
DVD - REGION 0